The Khachaturian sisters killed their father. Despite a history of abuse, they face murder charges 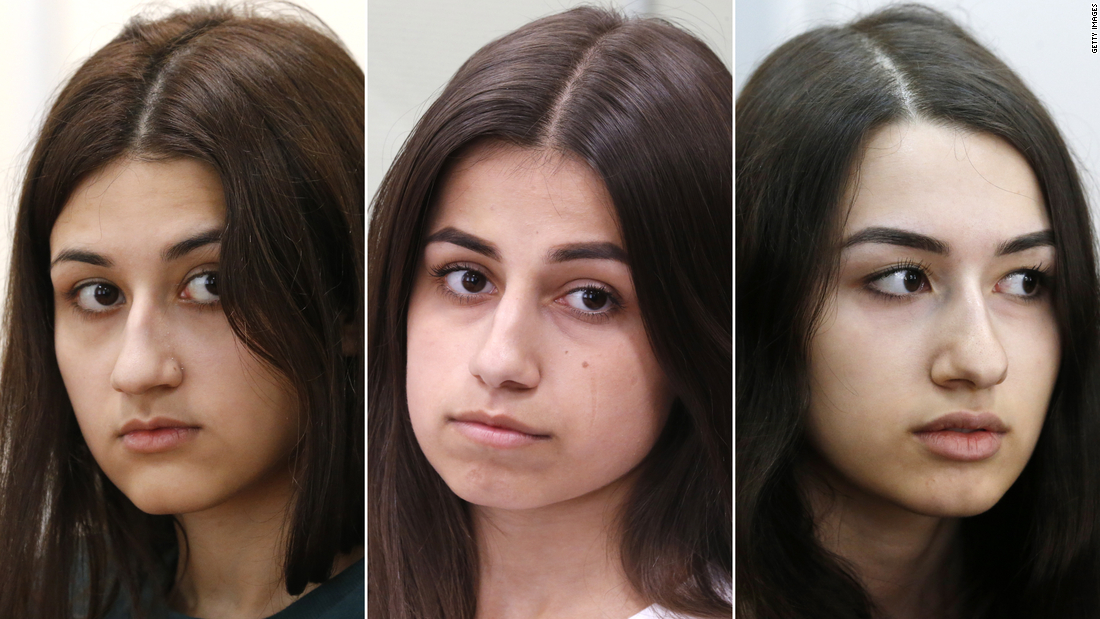 Hours before his death, he returned from a psychiatric clinic, set up his three daughters to punish them for a messy apartment, and, according to his investigators and nurses’ lawyers, sprayed their faces with spices. His eldest daughter, Krestina, who has asthma, fainted.

That night, the Chatauryan sisters – Krestina, 19, Angelina, 18 and Maria, 17 – decided to kill their father. They attacked him with a hammer, a knife, and the same can of spice he had turned to before.

Excerpts from the interrogation, which were leaked to the press and verified by a CNN lawyer for one of the nurses, show that the women tried to inflict injuries on themselves to make it look as if their father, who had slept at the beginning of the attack, had first hit them with a knife. Then they called the police and an ambulance.

The next day, the three were arrested and confessed to murder, saying they had endured years of sexual, physical and emotional abuse, according to their lawyers and the Russian Prosecutor General̵

Last summer, the sisters were charged with fictitious murder, which caused a stir among activists in Russia, facing a widespread problem of domestic abuse.

The Khachaturyan case quickly became the cause of the celebration of legal groups fighting for the adoption of a law to protect victims of domestic abuse, which was postponed by parliament in 2016.

After a long and intertwined pre-trial investigation, their court Friday will open in the Moscow courtroom. The two older sisters, Krestina and Angelina, will stand trial. Maria, who was a minor at the time of the killing but charged after the age of 18, was intellectually incapable of murder and one of the nurses’ lawyers, Aleksey Liptser, will be tried on her own,

Domestic violence experts, along with the nurses’ defense team, argue that if there are no adequate safeguards within law enforcement and the judiciary, their only choice was to defend or eventually die at the hands of their father.

In text conversations obtained from their father’s phone and posted on Facebook by Liptser, Mikhail Khachaturyan appears to have threatened to kill them and sexually abuse them and their mother.

“I’ll beat you for everything, I’ll kill you,” says a text from April 2018, accusing them of having sex with a friend. “You are prostitutes and you will die as prostitutes.”

The explicit transcripts also painted a cool picture of mental, physical and sexual abuse, which dates back at least four years before the killing.

“We think they had no choice. The father forced the girls to despair, their whole lives were a constant hell. They cannot be compared to healthy, calm and balanced people … [the] the girls developed serious mental illnesses, including abuse syndrome and post-traumatic stress disorder. This was confirmed by all investigations into the case, “said one of the lawyers, Aleksey Parshin.

Since last summer, activists have organized dozens of demonstrations in support of the nurses as part of the “I Didn’t Want to Die” campaign and called on the authorities to reclassify the case of nurses’ self-defense.

Celebrities ranging from former presidential candidate Ksenia Sobchak to Down singer Serj Tankian have given for sisters reasons for leniency.
A 2019 survey conducted by the independent polluter Levada Center showed that 47% of Russian women and 33% of men believe that the actions of Khachaturian nurses were justified.

A 2019 investigation by Russia’s Media Zona on justice and prisons found that nearly 80% of Russian women imprisoned for premeditated murder in 2016-2018 were trying to protect themselves from a rapist.

While Russian lawmakers have left a domestic violence bill to the backburner since 2016, they found time three years ago to decriminalize some forms of abuse.

In 2017, under pressure from the Russian Orthodox Church and advocates of “traditional values,” parliament overwhelmingly passed a bill known as the “slapping law,” decriminalizing the first crime of domestic violence, which did not seriously harm the person, seriously harming him. less serious administrative offense.

At first glance, public pressure seemed to reverse the case of the Khachaturian sisters.

In January, the prosecutor’s office upheld defense allegations that the Khachaturyan sisters had been subjected to “beatings, constant humiliation, threats and abuse, physical and sexual violence,” and that they had developed a “defensive response.”

Prosecutors then ordered the committee of inquiry to reclassify the case from premeditated murder to necessary self-defense.

Parshin told the state news agency TASS at the time that the move “essentially marked the end of a criminal investigation” against nurses who had been imprisoned for up to 20 years on murder charges.

Viktor Grin, the same prosecutor who was the first to recommend downgrading, confirmed in a stunning reversal in May that the nurses would actually be subjected to deliberate murder charges. No explanation was provided for this change.

Mari Davtyan, a lawyer for nurses who often represent victims of domestic abuse, linked the reversal to the broader trend of human rights abuses, which has been growing since the adoption of the controversial amendments to the Russian constitution to the referendum on July 1.

A referendum aimed at consolidating President Vladimir Putin’s government in the coming years was followed by a number of well-known arrests, such as accusations of treason against state journalist Ivan Safronov or the prosecution of former Khabarovsk governor Sergei Furgal, who was taken to Moscow on on the basis of long-standing murder charges, which sparked mass protests in the Russian Far East. Both deny any wrongdoing.

“I think it’s impossible not to notice what’s going on every day since July 1, 2020, the state has chosen its path,” Davtyan wrote on her Facebook page. “And the case of Khachaturyan is no exception.”